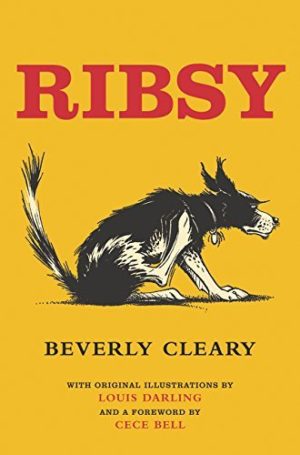 No one but Jack London, perhaps, has ever written so convincingly from a dog’s point of view as has Beverly Cleary in Ribsy. Like most dogs, Ribsy seems charmingly brain damaged. His loyalties are permanent but also have a happy-go-lucky fluidity that embraces many; he forgets to be ashamed for very long; and forgets discouragement. He’s in a word dogged.

When he’s ashamed, he rarely knows what he did wrong, and moves on with admirable alacrity. He solves problems with the tools he has at hand, for example, waiting. This is how he deals with young Ramona Quimby, who constantly irritates him. There’s waiting and there’s also trying, again and again. There’s subterfuge. At one point he feigns sleep, waits for a ticket-taker to walk away, and then sneaks into a stadium—I think in pursuit of hot dogs. Wittgenstein said that a dog is incapable of hypocrisy, but he never met Ribsy. I assume he had met a hot dog somewhere along the line since Wittgenstein was from Vienna, hometown of the original wiener.

Wittgenstein, Cleary, and Jack London aren’t alone in imagining what it is to be man’s best friend. Franz Kafka’s short story, “Investigations of a Dog,” predictably imagines a dog in rebellion against his own nature, a dog apart from other dogs, a dog who’s uncomfortable being a dog. Ribsy is by contrast one of those unquestioning dogs that Kafka’s tormented narrator would have envied. Kafka was famously not at home in his body and with his instincts. He is the greatest of artists devoted to that problem Freud named Civilization and Its Discontents, and it makes sense that Kafka chose the dog as a representative creature who (except for his unusual narrator) is content, in direct proportion to his incivility. My grandfather called all dogs “he,” and I always felt this had something to do with their incivility. There’s something unfussy about drinking out of a toilet.

Jack London’s White Fang, however, who’s three parts wolf and one part domestic dog, shares in the Kafkaesque dog’s alienation from his own species and in his struggles with the yoke of civilization. A harsh Indian master called Grey Beaver gives White Fang his first taste of civilization, and White Fang learns to revere human beings as gods. But he doesn’t feel at home with the civilization forced upon him in the company of men until he discovers the hidden instinctual pleasures that civilization alone makes possible: love and even violence on behalf of those he loves.

In a non-fiction book that tries to imagine the psychological experience of a dog, Jeffrey Masson quotes the 19th century pediatrician Louis Robinson on the presumed centrality of human beings in the canine weltanschauung. I wonder if Robinson got this from London or the other way around:

It has been said that a man stands to his dog in the position of god; but when we consider that our conceptions of deity lead us to the general idea of an enormously powerful and omniscient man, who loves, hates, desires, rewards, and punishes in human-like fashion, it involves no strain of imagination to conceive that from the dog’s point of view his master is an elongated and abnormally cunning dog—of different shape and manners certain from the common run of dogs, yet canine in his essential nature.

Dogs have much that’s human in them, and we have much that’s canine. If dogs have something to teach us, perhaps it’s not to be too discouraged by civilization and its discontents. Like Ribsy, or like a child, we can still love and can still find outlets for a natural aggression that is, after all, part of the life-force. We, too, can run after hot dogs and forget what to be ashamed of.