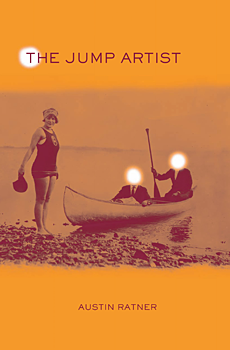 Released 2009 – A Novel by Austin Ratner

Sami Rohr Prize for Jewish Literature – The extraordinary tale of a man who transforms himself from a victim of rampant anti-Semitism into a purveyor of the marvelous.

“In The Jump Artist Austin Ratner gives life to a story both emblematic of the horror at the heart of the 20th century—the hunted Jew—and absolutely personal in its particulars—the extraordinary life of Philippe Halsman. Ratner’s great skill is to  give us the panoramic political setting of the life, and at the same time the arresting details, the breathtaking sense of the lived experience. A terrific debut.”

Anna Funder, author of Stasiland and All That I Am!

“This elegantly-written tribute makes as beautiful a use of the darkness and light of one man’s life as a Halsman photograph of a pretty young woman.”

“A deftly constructed portrait of an artist’s extraordinary life … an absorbing read … this is a debut full of promise. Halsman would later become famous for his portraits of people jumping, which he believed unmasked them, exposing their hidden selves. Ratner’s novel is a fitting tribute.”

“A remarkable work… a triumph of the human spirit over tremendous adversity.”

“Beautifully rendered…. The Jump Artist is fiction, but it teaches a number of truths about European antisemitism and overcoming the adversities of the Old World in the New…. The story of Philippe Halsman, whose early life was blighted by injustice and antisemitism and whose later life transcended that trauma, makes The Jump Artist reverberate in one’s mind long after one has finished reading it. It is a most worthwhile book.”

Eric Kandel, winner of the Nobel Prize in medicine, author of The Age of Insight and In Search of Memory

“Tremendous resonance… one of the most promising debuts of the year.”

“A bold and wondrous combination of dark history and beautifully delicate psychology.”

“A beautifully scrupulous, intricately detailed novel about joy and despair, anti-Semitism and assimilation, and like a great photograph, it seems to miss nothing, and to catch its subject in all his complexity.”

“Transcends the bounds of historical fiction.”

“This brilliant first novel is a work of great talent, power and sensitivity that explores the human condition and the triumph of the human spirit in overcoming seemingly insurmountable odds. It is historical fiction at its best and most creative.”

“A tale of passionate commitment.”

“This month, Ratner’s brilliant first novel, The Jump Artist, makes its debut…. A fascinating tribute to the ‘jump artist’ through the prism of a dark and horrific time in European history.”

“A beautiful, if dark, psychological portrait of a man suffering under the weight of his own doubts, as well as the world events that have deeply personal consequences for him. Ratner artfully nudges the reader, offering guideposts for the book’s turn toward the surreal (perhaps prefiguring the photographer’s collaborations with Dali) and reminders that the protagonist may exist in our past but doesn’t know his own future. The possibility of despair and madness are made to feel very real, even to readers who know how Halsman’s story ends….”

The Gazette of Cedar Rapids, Iowa