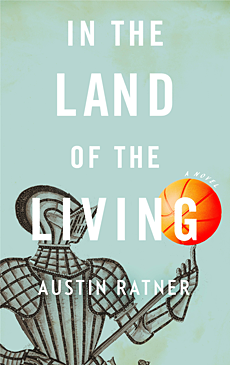 Available in Paperback – A Novel by Austin Ratner

A Barnes and Noble “What to Read Next” Selection and an iTunes Book of the Month – A dazzling story of fathers, sons, and brothers – bound by love, divided by history. Part family saga, part coming-of-age story, In the Land of the Living is a kinetic, fresh, bawdy yet earnest shot to the heart of a novel about coping with death, and figuring out how and why to live.

“Hilarious and brilliant … [In the Land of the Living] made me laugh like I did when I was reading Goodbye, Columbus for the first time. A combination of Beckett and Mel Brooks, it defies any reviewer’s abilities to describe … an exuberant, terrific book.”

“Austin Ratner’s In the Land of the Living made me laugh out loud, and it also left me deeply moved. Part vaudeville and part tragic opera, it dances and rages with uncommon wisdom, conveying the pain, comedy, and beauty of familial love across the generations.”

“Accomplished and moving… In the Land of the Living pulses with fury and grief… This novel is a study of bereavement and anger and of the complex, shifting seam between them… Between these vivid frenzies are flashbacks that introduce a tender, vulnerable voice. In these, Ratner captures 3-year-old Leo with uncanny precision, and his childhood sorrow is convincing and devastating… Sad and clever, resonant with loss and grief.”

“In the Land of the Living is as accomplished as it is ambitious, as mythic as it is intimate, and as permeated with comedy as it is with pathos. By telling the singular story of a father and a son, Ratner gives us a timeless tale about the weight of expectations, the long reach of trauma, and the power of family to both shatter and rebuild us.”

“[Leo Auberon] has the essential elements of a great Salinger-esque hero—bright, precocious, haunted by family.”

“Austin Ratner’s imaginatively drawn young protagonist is caught in a classic Freudian triangle that creatively bears the imprint of Henry Roth’s Call it Sleep, Isaac Rosenfeld’s Passage from Home and Philip Roth’s Indignation… The initial part of the story unfolds in 100 tightly and compellingly written pages, which could easily stand alone as a brilliant novella, equal in power to Ratner’s first novel, The Jump Artist… [The later chapters] allow readers, through fragments, snatches of conversation, rapid scene-change, and omniscient narrative, to infer and imagine much in this richly wrought story… [A] well-crafted novel, which like Ratner’s The Jump Artist, helps us see that one cannot easily overcome painful memories, or even the disturbed patterns of thought that pain elicits.”

“In the Land of the Living is a delightfully sprawling family epic. Tinged with loss, this coming of age story is moving, at times heartbreaking, but always leavened with humor.”

“A supremely great read, especially for literary fiction lovers…. One of the ten Best Damn Books of 2013 so far.”

“A precisely detailed and richly textured story of a father-son relationship powerful enough to transcend the father’s death… Ratner’s approach to the semi-autobiographical bildungsroman echoes the one taken by writers like Harold Brodkey and Thomas Wolfe before him; he gilds the everydayness of the story with elevated, extraordinary language and a sense of literary ambition that refuses to allow the story, no matter how normal, to be plain… In the Land of the Living offers a precise, darkly lyrical take on the contest of filiation as it has continued to shape Jews’ lives into the present.”

“We have a genuinely gifted writer in our midst.”